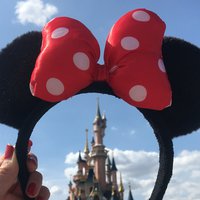 For as long as I can remember, I have been a huge fan of Disney. I would even say that you could call me a Disney-a-holic! If you ask me why this is, I don’t really think I could give you a specific reason…I just have always been a big fan. Whenever a movie comes out, I try to go see it. I own lots of Disney merchandise. Growing up, Disney Channel was always found on our television set. And most importantly, I have been to Walt Disney World in Florida over 10 times – including the time when Carin (who is similarly obsessed) and I got engaged, and our honeymoon! Needless to say, this love of Disney has spilled over to Kylie, Paisley, and Aubrie.

But something which I never really thought of was how Disney – specifically Disney World – actually gives us a model for us to follow as a church. That is, until I read the book, The Church Mouse: Leadership Lessons from the Magic Kingdom, by Christopher Perry. Mr. Perry talks about how the Christian church needs to ponder the idea of how to "become relevant or start a slow decline towards irrelevancy" (ix). After all, the world is always and quickly changing. Well, Walt Disney World is always changing too, working to keep up with society all the time. The challenge for the church is to do the same – to create the same excitement that Walt Disney World does year after year.

So, for the next couple of months, we are going to embark on a journey where we look at this concept of how Walt Disney World can teach us a lot as the Church, as we attempt to stay relevant and continue to minister to an ever-changing world. Because let me tell you, there is a lot we can learn about being the Church! The ideas presented will be based on the book I mentioned, so if you want to know more, I encourage you to check it out. Today we begin by looking at the Disney DNA – the culture which Walt Disney World creates. And what we find is that it is a culture which we should strive to create as the Church – a culture which traces its roots back to the first church in Acts. This culture can be defined using the acronym EPIC – experiential, participatory, image-driven, and connected. This acronym can do a lot to lead us in this changing-world as we attempt to be a transformative, life-changing community. So, let us take a journey together and discover how the Magic Kingdom can teach us how to build God’s Kingdom.